So I’ve been seeing this really great therapist that is one of those no nonsense, cut to the chase kind of people.  Sometimes I think her favorite phrase is “that’s not it, dig deeper”. Over the past year we have really been working on setting boundaries and peeling apart the layers of my life that aren’t all that healthy.

A few months ago she said she wanted me to see a psychiatrist about my meds. I don’t recall why, but she also mentioned something about ADHD.. she was the second person to bring it up.  I had been tested for it a few years ago by some psychiatrist and found to have it, for which she prescribed some meds for.  I don’t remember what they were, but they slowed my brain down so much it was like mud. I hated them and stopped taking them after a week or so. After all, if that’s how “normal” brains work, I’d rather stick with my familiar million-miles-a-minute thought processes thankyouverymuch.

Fast forward to my psychiatrist visit. This guy is kind of far away – it’s an hour there and an hour back. I live in the Seattle area where there are plenty of psychiatrists, so why this guy? Just go see him my therapist said. 9 times out of 10, she has called out something about me MONTHS before I could see it, and she hasn’t steered me wrong yet, so I said sure..

Met with the guy, had a great (and relaxed) initial consultation. We discussed my depression, the meds I was on, my abuse history, my relationships, the fact that I was always tired.. pretty much touched on everything. His instructions at the end were “go get a sleep study done. If they don’t find anything, then come back and we can discuss your ADHD”.  wtf.. a third doctor?

So I got the sleep study.. I did a three night at-home deal which showed some interesting results, but nothing conclusive so I did an overnight at their clinic. His conclusion? Mild sleep apnea, but not enough to explain why I was always tired.. his prescription? Here.. have some adderall.

Ummm. I’m a former meth addict – the last thing I need is a prescription for amphetamines.  But I took it.. because.. addict.

Anyway, made a follow up appointment with the other psychiatrist.. took the adderall for a week before meeting with him (“just so I can tell him about it” was my excuse.. but.. addict) and to be honest, I totally hated it.  Maybe not totally, but it was nothing like the old meth high I used to know and love. It was more like the “been up for 24 hours and now you feel like crap” high. So totally not my thing. so I told the psych about it and he agreed that with my history, adderall was not the ideal option.

So he gave me 10 modafinil and 10 armodafinil.. and 60 ritalin .. and told me to play with them and see what I liked.

Turns out, Ritalin was that stupid mind-slowing drug that I had hated in the first place.  But, it was offset by the Modafinil and Armodafinil so there was this weird alertness to balance the brain mud.  I *think* I like the armodafinil better, but changing drugs/doses 4 times in 20 days makes it difficult to really tell what’s what.

For me, the Modafinil sits in between the Adderall and the Armodafinil. Kind of tweaky, but at least it doesn’t have the jaw clenching, back tightening effect that the Adderall does.

So I called the doc and said I want the Armodafinil.. and he asked if I was taking 1 or 2 of the Ritalin.  I had been taking 1 I said, but after the phone call I ran back to the bathroom and saw he had given me 60 pills for the month. So I’m guessing he wanted me to take two. So today I took two, along with the Modafinil (I’m out of the Armodafinil until the pharmacy fills it) and OMG it was like night and day. I was alert and sharp. I could actually focus without being annoyed with everything and everybody that I came into contact with. It’s like a new world has opened up and I can be productive and have the energy I think I should have (I tried testosterone supplements – all they did was make me super horny lol), while at the same time I’m not totally spaced out and tweaky.  Time will tell of course, but for today I’m good.

Also, the Adderall really worsened my depression.. I don’t know if that was the drug itself, or the fact I knew that as a former meth addict, I really should know better than to take amphetamines and yet I was taking them anyway.  The Modafinil seems to also heighten my depression, although not as much.  I don’t remember the Armodafinil doing such, but I guess I’ll find out when I pick up my prescription tomorrow.

I was also going to write about how my marriage is falling apart, but this entry is long enough..

Wonderful new review posted on Amazon.  Thanks, Diana wherever you are!

“This was one of the most powerful books I have ever read so far. Truly inspriring. There were times where I could relate to the author emotionally. Not for the same reasons but it’s like he can describe deeply the emotions that took place.“

Been a while, but recent developments have led me both back into recovery and back into therapy.  I have a *great* therapist now that won’t take any crap and forces me to dig deep for the true answers (not the ones I want to give).

Hopefully I can manage to update this blog as I go this time around.  Took forever to get logged back on 😦

April is National Child Abuse Awareness Month and to honor this, I have dropped the price for the Kindle version of My Father’s Prostitute to 99c on Amazon, and slashed 40% off the price of the paperback if you buy it though lulu.com. But that isn’t the only exciting news – I awoke this morning to find that Pixel of Ink had selected the book for their Book of the Day yesterday! I didn’t submit it to them and have no idea how it ended up on their radar, but it was wonderful news to wake up to this morning!

I think in return, I will be donating 50% of all proceeds from this month to a local agency that deals with the healing from childhood sexual abuse. There are several in the Seattle area so I guess the hard part will be to figure out which one…

As a result of trauma, I suffered from PTSD for years.  I was jumpy and always on edge.  When I had kids, I knew I needed to fix that.  Kids jump on you, they surprise you, they do all sorts of things that aren’t compatible with PTSD.  So I did.  I spent years working on it so that I wouldn’t have such instant reactions.  Reactions that could hurt my child.

But I was never sure.  Was it gone?  Was I “fixed”?  I do still find myself scanning my surroundings.  I find it difficult to have a one on one conversation in a room full of people because the person in front of me is not a threat – so my attention focuses where there may be one and doesn’t allow me to focus on the person I am speaking with.

For the past 8 months or so, I have been taking Krav Maga classes.  If you aren’t familiar with it, it’s a self-defense martial art form that, unlike many other self-defense styles, is designed to inflict maximum damage on your attacker.  It was developed by the Israeli Army and is designed for close combat.

Last night as I was leaving the grocery store, I felt something in my back and heard a voice say “give me your money”.  I paused.  I hesitated and turned to look. It was my Krav instructor and I ‘failed’ the test.  He wanted me to react by sweeping his arm away while delivering a strike to the face. But I didn’t.  5 years ago I would have though.  So while that may have been a failure on one hand, to me it means my PTSD is no longer controlling me.

Scientists have discovered the brain chemicals responsible for the development of PTSD in rats.  This could lead to better and more effective treatment.

Monday 31st August is We Love Memoirs Day and will be celebrated worldwide. We Love Memoirs (WLM) was set up on 31st August 2013 by two memoir authors, Victoria Twead and Alan Parks, who wanted to create a place where memoir readers and authors could come together and chat.
Victoria Twead is a New York Times bestselling author of “Chickens, Mules and Two Old Fools” and the “Old Fools” series, while Alan Parks is the author of “Seriously Mum, What’s an Alpaca?” and the “Seriously Mum” series.
Victoria and Alan were determined to foster a warm community and have always discouraged authors from pushing their own books at readers. The results have been astounding, and WLM has grown quickly. New friendships are formed every day, and WLM meet-ups across the globe have become common. Small wonder that We Love Members is often described as “the friendliest group on Facebook”. Join WLM today and start chatting with memoir authors and readers. https://www.facebook.com/groups/welovememoirs/ 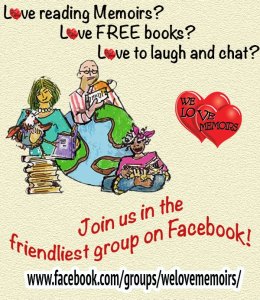 I’ve heard good things about turmeric in the past, so this wouldn’t surprise me if this study panned out. Although they haven’t yet tested this on humans – only rats – it is an interesting concept.  In a nutshell, they have noted that curcumin, a compound derived from the spice turmeric, has been found to alleviate PTSD symptoms in rats, possibly by easing inflammation in the brain. I don’t know how dramatic the change would be if you switched to adding more turmeric to your diet, but I don’t think it would hurt…. now where is my recipe book…

With all the excitement of winning the Pinnacle Book Achievement Award for Best Memoir, I realized I had completely forgotten to upload my new cover!  This cover was graciously designed by Amygdala Art and I think she did a great job at capturing the spirit of the book.

Just received word that we have been awarded the Pinnacle Book Achievement Award for Best Memoir, Spring 2015.  I’m honored to have had my story chosen and hope that this will help spread the message of how childhood sexual abuse affects people for a lifetime.